THIS Saturday night's (May 4) fixture at Castrol Edge Lismore Speedway will be one of the busiest of the season and promoter David Lander wants to ensure there's more than enough time remaining on the programme for the Australian Demolition Derby Championship.

With seven race car categories programmed comprising heats and feature events prior to the national crash title, the show has to fit within a required time curfew. There are 32 events on the race card including the demo derby, hence the 5:30pm start to the fixture.

The highlight of the meeting is the Australian Demolition Derby Championship and Lander plans to have this exciting spectacle under way with plenty of time to spare.

“There has been a lot of interest surrounding the running of the Australian Demolition Derby Championship,” Lander said.

“We can always get a gauge on what following a particular event has and the demo derby has had quite a reaction with plenty of phone call enquiries to our office during the week.”

This is the final meeting of the season and the bash and crash showdown also represents an event to be enjoyed by the whole family.

“I've always said speedway has to be family entertainment, no matter what the events are, but these demolition derbies do have wide appeal and are enjoyed by people of all ages.”

With bragging rights as Australian titleholder, this particular Demolition Derby promises to be explosive.

The derby will be conducted under strict rules and regulations with driver safety the most important factor.

The driver of the last car running will be crowned 2019 Australian Demolition Derby Champion.

Cars will be crunched in collision and carnage, mud guards will be mangled and body work battered

in the ultimate survivor contest.

A car does not even have to be equipped with all four wheels but while still mobile, remains in contention for the win, which pays a record $2500.

It's very good money for a night's work, while the driver judged the most spectacular collects a $500 cheque.

It's a big programme of events and a fitting way to round out the very special 2018-19 Golden Anniversary season.

Gates will open at 4PM and racing starts at 5:30pm sharp - DENNIS NEWLYN.

Caption: Drivers in this Saturday night's Australian Demolition Derby Championship at Castrol Edge Lismore Speedway can use reverse gear to crash into an opponent, as typified in this photo from a previous non-title event at the venue. Photo: Tony Powell. 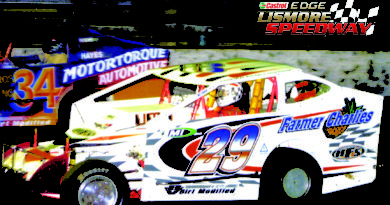 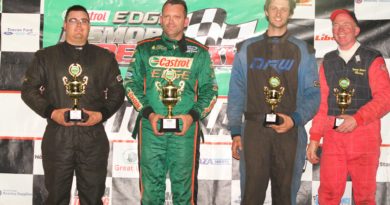