Biviano had an untroubled run at the head of the field after he started off the front row as he was chased to the chequered flag by runner-up Matthew Layton and third-placed Aaron Hall.

Biviano set the fastest lap midway through the main event when he clocked 17.512 seconds for a speed of 82.220 km/h. Jordan was all conquering on the night after he emerged unbeaten from his three heats and was top pointscorer.

Despite a few yellow lights which slowed the action in the 30-lap feature race, Biviano always had complete control of the situation, though he still had to work hard during the event after he was pressed by Stuart Fawcett. In the early stages Layton battled with Ash Graham and while all this occurred Thomas Fuller, who was also there with Nick Chilcott, made his presence felt before he hit the fence.

At one point as the race unfolded Fawcett was right on Biviano's bumper, while Josh Boyd also closed on the two front runners. This was one of the highlights as Jason Dreaver also drove a steady race not far off the leading trio followed by Layton.

Nearing half distance Boyd was sent to the rear of the field after a spin while Fawcett then withdrew with ten laps remaining. Layton moved into second as the race entered its final stages.

He ran hard and at one point almost “lost it” coming out of a turn and ended up on the edge of the infield before he recovered sufficiently without losing his second position. Aaron Hall also was impressive with a safe drive into third placing.

As the chequered flag flew it was Biviano, from Layton and Hall.

It was not a good night for state and Australian Champion Joel Berkley whose car sustained suspension damage on the way to his heat ten victory and he was a non starter in the final.

Another who had a disappointing night was inaugural East Coast GN winner David House who battled through the heats but missed the cut. While he looked ok, he never got a clear run in the heats and did not score enough points for the main event in his comeback appearance at the Lismore venue.

Next meeting at Castrol Edge Lismore Speedway will be March 20, highlighted with the running of the time-honoured Australian Speedcar Grand Prix. 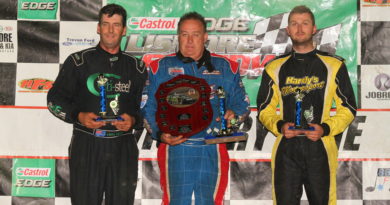 THREE IN A ROW FOR NEWSTEAD 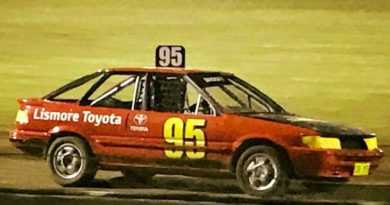