The state title was a hard fought event and Pezzutti recorded the fastest lap with a time of 14.222 second for a speed of 101.252 km/h. The V8 Dirt Modified B-Main was taken out by Phillip Roberts.

A big interstate contingent was on hand for the annual Northern Rivers AMCA Classic. The preliminary main event was taken out by Tasmanian Daniel Brooks.

A full report on both days will appear tomorrow - DENNIS NEWLYN. 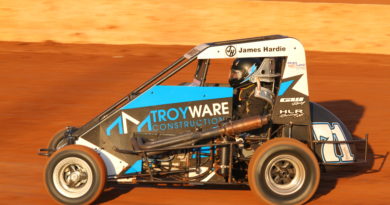