Castrol Edge Lismore Speedway promoter David Lander is on the road to recovery from open heart surgery after being discharged from a Gold Coast hospital last week.

He is confined to light duties at home for the next six weeks before returning to full time work.

David is presently co-ordinating with incumbent promoters Mick and Kim Sauer the immediate future of this season after the worst flooding in Lismore and the Northern Rivers region history.

Like all areas, the Lismore Showground was devastated and sustained considerable damage. A week after flood levels dropped the ground was still without electricity and the Lismore Speedway office remained closed.

The debris that flowed into the showground from swollen rivers was considerable and the clean up operation is massive. The refurbished cafeteria area under the main grandstand was damaged while other food outlets on the ground, and its equipment, have been lost.

One small positive note this past few days has been the return of all car parking spaces available inside the ground on speedway nights.

Further updates relating to this season will be issued as soon as the latest information is available. 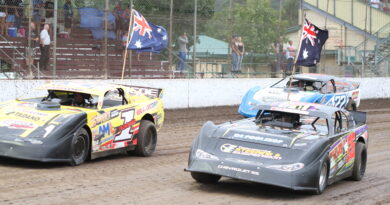