While the basic rules are very simple and it's either crash your opponent out of the event or cop the same return serve in the ultimate elimination contest, there are some specific rules set down by controlling officials.

All cars must be visible to race controllers and continually running. Drivers who try to steer clear of collisions and deliberately take refuge behind cars already immobilised on the track, will be black flagged.

The whole purpose of the demolition derby is non-stop collision with little precision.

“The rules are very basic and it's really just a crash marathon to get down to the last car running to determine the winner,” promoter David Lander said.

“But some competitors have been known in the past to try and stay away from the action in a bid to save their car without crashing into opponents too many times. This is not in the spirit of the competition as the winner must not only participate in non-stop action, but be deserving of the victory.”

With the Australian Demolition Derby Championship on the line, there is sure to be some “unique tactics” employed by drivers and officials will have to be on the lookout all the time to ensure all entrants abide by the rules.

The winner gets $2,500, and the driver judged the most spectacular receives $500, so there's plenty of incentives.

It promises to be one of the most competitive demolition derbies ever held at the Lismore Showground venue as it's not every day the Australian Demolition Derby Championship comes to the City of Lismore!

For the speedway purists, there is also a massive racing programme planned with seven categories on the race card.

It will be one of the biggest meetings of the season and a fitting way to bring down the curtain on the 2018-19 racing term at Castrol Edge Lismore Speedway this Saturday night.

CANNON READY TO BLAST INTO ACTION 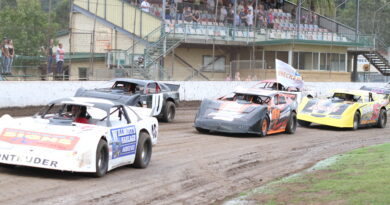