He has hauled into Castrol Edge Lismore Speedway for this weekend's Saturday and Sunday night double header featuring the running of the NSW V8 Dirt Modified Championship (January 26) and the Golden Jubilee 50 lap main event (January 27).

When not racing he works in the mines in the Pilbara region north of Perth. But racing is his love in a long time family involvement devoted entirely to the sport.

“I was the lucky one who got to fly and my parents drove the distance,” Travis quipped.

A few years ago he raced at Lismore Showground and, like previously, he plans to leave his late model American designed Troyer factory car here because a return appearance later in the season is not totally out of the question after he returns home early next week to fulfill his work commitments.

After coming off some of the bigger WA tracks like the Perth Motorplex and Bunbury Speedway, the smaller sized Lismore circuit presents a new challenge. “It's certainly a different playing field,” Kennedy, 23, said relating to the demanding, circular Lismore circuit, “but I'm familiar with it.”

He is currently in his seventh season of V8 Dirt Modified racing. “My father used to race and then he bought a car for my older brother Matthew. I would not be able to do it without them.”

Travis has a very simple philosophy and approach to his racing and why he and his family are prepared to travel long distances to compete.

“To be the best you have got to race the best,” he said. “The toughest V8 Dirt Modified competition is over in the east and that's where I want to race when the big meetings are held.”

Kennedy arrives in Lismore fresh from a very impressive fourth placing in the Australian title last weekend at Toowoomba Speedway.

This weekend's two-night fixture will be highlighted with a massive fireworks display on January 26 to celebrate Australia Day. The AMCA sedans also will contest their annual Northern Rivers Classic over the two nights - DENNIS NEWLYN.

Caption: WA's Travis Kennedy has travelled across the country to compete at Castrol Edge Lismore Speedway this weekend. 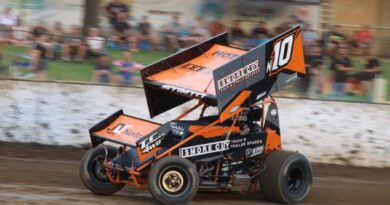 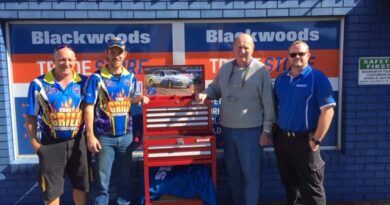