THIS COMING Saturday night, February 20 at Castrol edge Lismore Speedway will be a very special – and sad occasion – for Super Sedan driver Ian Brims who will announce his retirement from racing.

Ian has been around the scene for more years than he cares to remember but now, aged in his early 70s, he has decided to call time and hang up the helmet.

“We had plenty of good times and the opportunity to race all over Australia,” Ian said. “I have met some great people along the way. We take this time to thank everyone for their support during our speedway racing journey. It has been great and is so much appreciated.”

One of the highlights – among many stand out performances – was his victory in the Australian Modified Sedan Championship for the 1994-95 season. The title was held in Canberra and Ian bested a strong field as he led Victoria's Peter McCarthy and Queensland driver Darren Munro to the chequered flag.

But his racing involvement goes further than just competing. His company, Brims Concrete, has in past years been a naming rights sponsor of the series sanctioned by the Super Sedan Association of Queensland.

“The sponsorship is, I guess, because I have been involved with the sport for such a long time. It's great to put something back into the sport,” Ian explained. 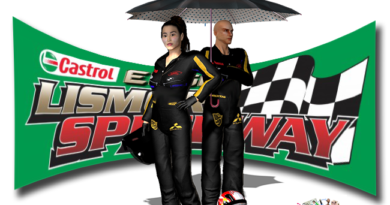 Racing Cancelled Today Saturday, We are Racing Sunday from 5.30pm