Jolley raced to victory in the Golden Jubilee 50-lap feature race, while Randall completely dominated each of the three 20-lap V8 Dirt Modified feature races and was unbeaten on the night.

However under the format, which included car passing points to determine the overall Triple 20s series winner, Andrew Pezzutti topped the point standings.

Pezzutti won the tournament because he started further back in the field for the three main events, whereas Randall was further up the front in grid starting positions.

Pezzutti scored 370 points and finished 66 markers ahead of the unbeaten Randall (304), while Chris Polsen was third in the final standings on 292 points. Tony Dunn, driving in the Sportsman category, was a deserving fourth overall on 262 points.

Time trials determined grid starting positions for the first 20 lap race and Pezzutti was fastest when he recorded a time of 13.987 seconds for a speed of 102.987 Km/h.

As events unfolded Randall was one of the slower qualifiers and garnered a starting spot at the front of the field. Randall took command of the opener. Not long after the race commencement there was a red light stoppage after an incident involving Geoff Rose and Harley Wright. Despite another race interruption for a yellow light after a spin by Zac MacDonald with 18 laps remaining, Randall was the winner of the first main event from Pezzutti and Josh Rose.

Randall was forced to pass some cars for his win in the second 20-lap feature race after he started out of position nine as Pezzutti was again forced to make his way from near the back of the field. Major interruption in the race with a yellow light was caused at the 11 lap mark after Scott Quirk rode a wheel and crashed heavily into the concrete retaining wall. Randall was followed to the chequered flag by Andrew Firth and Lee Gorton with Pezzutti a fast-finishing fourth.

Randall again got the job done in the third 20 lap race as he posted his third consecutive victory while Pezzutti was second and Chris Polsen third. Randall sealed his complete domination after he posted the fastest lap in each of the three feature races. His first win was the quickest with a lap time of 13.587 seconds (105.984 km/h.

Hard luck man of the 50-lap Golden Jubilee Wingless Sprint feature race was David Eggins who flipped his car in spectacular fashion with two laps remaining. Eggins looked certain of a major placing prior to the crash.

Jolley moved to the front in the initial half of the race and despite a yellow light to slow the action after Warren King stripped the spline out of a wheel centre, Jolley, driving the Lismore Nissan entry, took an impressive Golden Jubilee win from Matt Wright and Mitch Haynes.

Ben Hull impressed earlier in the night with two Wingless Sprint heat wins, while other heats were won by Jamie Usher, Eggins, Wright and King. 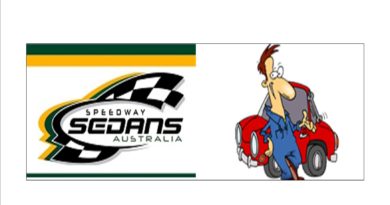 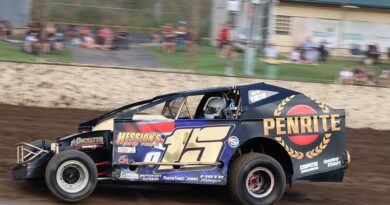 A TAYLAH MADE RESULT!