JACOB Jolley continued on from where he left off the previous night after he swept to victory in the annual 100-lap Australian Wingless Sprintcar Grand Prix at Castrol Edge Lismore Speedway on Sunday night, January 24.

Jolley, who led David Eggins and Michael Butcher to the chequered flag in the AGP, dominated the entire weekend with heat and feature wins the previous night.

“That got us in the points where we needed to be for the Sunday night,” Jacob said.

Heading into the AGP, he won his heat and the pole shuffle Sunday night.

“That put us off the front row and played a big part but I knew the top (of the track) was going to be fast. Obviously Trent got up there early on us and he was fast. I had to try and keep up, thankful for a restart. Whoever got the jump at the restart was going to be in command,” Jacob added.

It was Trent Martin who led the opening stanza before the first yellow light appeared after 24 laps.

Robbie Mazzer did not have luck on his side when he broke a fan belt as he stopped on the track and brought on the first of the slow-down laps.

Martin had set a cracking pace and had already lapped a number of cars before the caution period.

Jolley chose the high line for the restart – as he did for the other yellow lights later in the event – and took over the front running.

From that point on it was Jacob Jolley's race as he staved off the opposition on the restarts and maintained a good pace at the head of the field.

There was some dicing further back in the field, but nobody could catch Jolley.

Minor placegetters Eggins and Butcher were followed across the line by Mitch Bootland, while the top ten ten were rounded out by Martin, Ben Hull, Seiton Young, Anthony Grant, John Egan and Brett Russo.

The first five cars to the chequered flag all finished on the same lap while only two laps separated the entire top ten finishers in what was another enthralling 100 lap spectacle from the Wingless class.

In addition to Jolley's heat win, other winners were Mazzer and Brock Gardiner.

Jaiden Santin returned to the winner's circle as he raced to victory in the final round of the Northern Rivers Junior Sedan Championship.

Jaiden was forced into the runner-up spot in the previous night's first round as Zac Brimms took the feature win.

Shane Newstead made a welcome return to the winner's circle when he took out the AMCA feature race, while other main event winners were: Shane Laurie (Four Cylinder Sedans), Joel Berkley (Production Sedans) and David Putsey (Street Stocks). 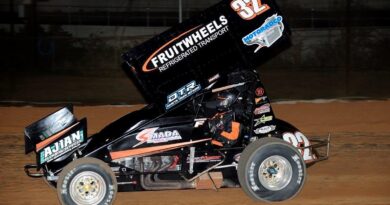 FERGUSON READY TO CHALLENGE LISMORE FOR THE FIRST TIME