CASTROL Edge Lismore Speedway will be represented in the 25th anniversary Lantern Parade this weekend (June 22) thanks to an initiative instigated by ten year-old Ryley Bywater.

Ryley, who is a speedway fanatic and attends every Lismore race meeting, put pen to paper and sent a letter to speedway promoter David Lander suggesting the track should be a part of this year's parade.

Lander was impressed with Ryley's proposal and made contact with Lantern Parade organisers.

With help from a lot of people, the kids have constructed a replica race car built out of cane.

Some of the children involved in the project, including Ryley Smith and Jaiden Santin, race in the junior class at Lismore Showground Speedway.

“The Lantern Parade is an event for all of the community and it's wonderful to have Lismore Speedway represented in this year's parade for the first time,” Event Manager and Artistic Director Jyllie Jackson said.

This year's parade promises to be one of the biggest ever celebrating the 25th anniversary.

“The way all this has come together with our representation in the Lantern Parade for 2019 is wonderful,” Lander said.

“Ryley's letter really made the point that our track should be involved and what happened after that has been such a concerted effort by some of our speedway folk to get us a display and everyone has done a brilliant job to make this car from cane, which is superb.”

Plenty of hours were spent in the workshop glueing and cutting pieces of cane to come up with the end result to be viewed by thousands of spectators during this weekend's parade.

Caption: The kids' handywork: The replica race car that will be a feature of the Lismore Speedway display in the 2019 Lantern Parade. At front from left to right: Ryley Smith and Jaiden Santin. Also pictured are Sophie Santin, Ryley Bywater (centre) and Chloe Bywater. Photo: Tony Powell. (Article by DENNIS NEWLYN). 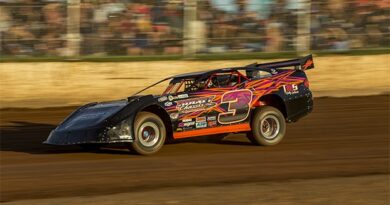