HISTORY will be created at Castrol Edge Lismore Speedway Saturday night (March 23) when one of the oldest Speedcar events in the world is held.

The time-honoured Australian Speedcar Grand Prix, inaugurated in 1938, comes to the Showground venue for the first time. Such is the prestige of this race, the Lismore track becomes only the tenth venue in AGP history that has hosted the event. In keeping with that stability, after speaking with representatives from the sanctioning Speedcar Association of New South Wales, promoter David Lander has agreed to a two year deal to run the Australian Speedcar Grand Prix at Castrol Edge Lismore Speedway also in 2020.

This is wonderful news for Northern Rivers race fans who will now get the opportunity to see some of the best Speedcar drivers in the world compete at the Lismore Showground in consecutive years.

The Australian Speedcar Grand Prix is one of the four oldest Speedcar races in the world, joined by America's famous “Night Before the 500”, the Californian-held annual Turkey Night GP and the Victorian Speedcar Championship, all with a heritage that traces back to the 30s.

“This race is steeped in history and tradition and the AGP roll of honour reads like a who's who of world Speedcar racing,” Lander said.

“What this event means not only to Speedcar fans but also the place the AGP holds in Australian and world speedway, is a status that few other oval track races have achieved largely because its heritage goes back to 1938.

“We here at Castrol Edge Lismore Speedway are very proud to host the prestigious Australian Speedcar Grand Prix for the two years and it's also very pleasing to me that our venue is now a part of the wonderful history of this race.”

The biggest stars in Australian Speedcar racing history also have their name etched on the AGP perpetual shield.

Three of the leading drivers on the current Australian Speedcar scene who are all former National Champions – Kaidon Brown, Nathan Smee and Adam Clarke – have entered for the 2019 AGP. Both Smee and Clarke are former AGP winners.

Gates open at 4PM and racing (with a full support programme) commences at 5;30PM - DENNIS NEWLYN. 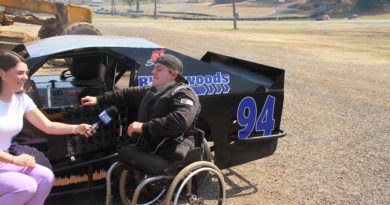