FORMER National Champion Matt Pascoe was too good for the opposition after he drove to a comfortable win in the 30-lap Super Sedan feature race at Castrol Edge Lismore Speedway Saturday night (January 12).

The main event also represented round eight of the Brims Concrete 2018-19 Super Sedan series presented by the Super Sedan Association of Queensland.

Pascoe, who was followed to the chequered flag by Darren Anning and third-placed Justin Randall, never put a wheel out of place.

He wasted little time reaching the lead after he started from an upfront grid position and was never headed, despite several yellow light caution periods.

Iam Brims was the initial leader before Pascoe made his move as the first casualty of the race after three laps was Bob McCosker who withdrew with a blown tyre.

As the race settled down interested focused on a battle for the major positions between Tania Smith, Brims and Justin Randall.

Justin Randall's father Wayne Randall also moved into contention in the traffic snarl near the head of the field. This was the pattern of the event and with 19 laps remaining Pascoe had raced to a half lap lead.

Wayne Randall continued his forward charge and looked for a way around Smith. Smith, Randall and Dion Bennett ran three wide before there was a tangle. Bennett could not continue at the restart as Pascoe moved clear of the field again before Wayne Randall quit the race with a broken fuel pump belt. At that point Brims also was sidelined as the laps ran out and Pascoe raced to a convincing victory.

Earlier in the night Pascoe served notice of what was to come after he won two heats. Other heat winners were: Anning, Darren Kane, Brims and Justin Randall.

It was not a good night for pre-race favourite Darren Kane who did not figure in the main event after he reported a “knock” in the motor and the Ian Boettcher team withdrew the car from competition.

It was also a very tough evening for Wingless Sprintcar star Robbie Mazzer who crashed in a heat due to the actions of another driver who tried to make a passing move where there was no room.

Mazzer escaped unscathed but the car was severely damaged.

The action continues next Saturday night, highlighted with the running of the annual 100-lap Australian Wingless Sprintcar Grand Prix. 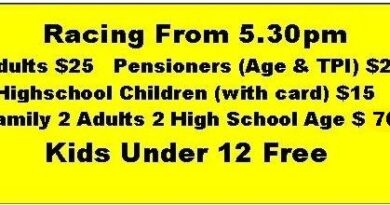 Opening Night This Weekend With The V8 Dirt Modifieds