DEFENDING Mr Modified Series Champion Mitch Randall has some repair work to do in the countdown to the series grand final at Castrol Edge Lismore Speedway Saturday night, January 8.

Randall crashed at Brisbane's Archerfield Speedway Wednesday and will be burning the midnight oil in the workshop to rebuild the car.

Crash occurred during hot laps when a torsion bar broke and it hurled Randall's car backwards into the safety fence at high speed. Mitch escaped unscathed though a little sore after his crunching encounter. He later indicated it was a “big crash” with a lot of damage done to the car, so time is now the essence to meet the January 8 commitment.

He is confident he will be ready and it's vital for Randall to make the deadline as he remains in strong contention to retain the Mr Modified Series crown.

He has been clearly the form driver of the series in recent years and is where he needs to be in points to take out the title again. His unbeatable form from last season has continued into the 2021-2022 campaign with an overall domination of main events.

There are several drivers still in contention for honours in the annual series. The tight battle in points typifies the intense competition the annual Mr Modified Series provides.

“It's still up for grabs and no driver has the clear advantage, “ promoter David Lander said.

“We have a good line-up of entries for the final so it promises to be one of the best meetings of the season.”

Controversy surrounded the outcome of the opening round on December 26 at Lismore after the original placings were changed and drivers were penalised positions.

Randall, although robbed of the win for allegedly passing on the grass, still finished runner-up in the revised top three placings, while Josh Rose was also omitted from the top three for not going to the weighing scales after placed originally as runner-up.

The top three from the opening round – winner Brock Gardiner, runner-up Randall and third placed Mark Robinson – are the major contenders. Robinson is a multi winner of the Mr Modified Series and is one of the major pre-race favourites.

Early heats on the night of the final will be vital in the countdown to the 40-lap feature race decider. 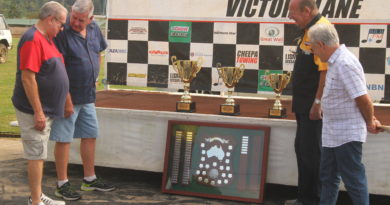