JOSH Rose took out the final of the Mr Modified series, however Jai Stephenson was the overall winner of the two-round tournament at Castrol Edge Lismore Speedway Saturday night.

Stephenson (408 points) clinched the series following a fifth place finish in the feature race. In a keenly contested two rounds, another former national titleholder Mark Robinson was placed second in final point standings (396), while the consistent Mitch Randall (393) was third in the series.

Randall was definitely one of the form drivers in this season's Mr Modified tournament after he was placed second to Rose in Saturday's 40-lap main event following a similar result in the December 26 opening round. Third man to the chequered flag in Saturday's feature race was Scott Cannon while Trent Scofield was fourth.

The 40-lap final was a rough and tumble affair almost right from the outset after Andrew Pezzutti, Harley Wright and Cannon got caught up in a tangle of cars. Pezzutti sustained a flat tyre in the incident and restarted from the rear of the field.

In the initial opening laps it was Scofield who was pacesetter at the head of the field. Lee Gorton, after initially leading, then ran near the front as Randall got underneath Robinson to continue his forward charge.

Stephenson and Cannon ran side by side in an enthralling battle for the minor placings before another yellow light slowed the action in the early laps.

Scofield led away as Rose also ran strongly, while Pezzutti made a strong charge from the back.

Then Rose passed Scofield as Randell also went by Scofield. Pezzutti's race was run after 17 laps when he headed to the infield with a transmission failure. Gorton, still in contention, had coming together with Rose, which also involved Paul Booker who withdrew as 23 laps remained. Rose kept his position at the green light while, soon after, Robinson spun at the restart with 21 laps left to run as he chased Randall. Robinson came back to finish sixth in the feature race in a strong drive.

Gorton also withdrew with a flat tyre and despite the caution periods, Josh Rose ultimately raced to the chequered flag with a good win over Randall and Cannon.

With points on offer, Robinson earlier recorded two heat wins, while Pezzutti, Rose, Cannon and Harley Wright also were successful in the heats.

The Lismore action continues next Saturday night when the Super Sedans headline the show. 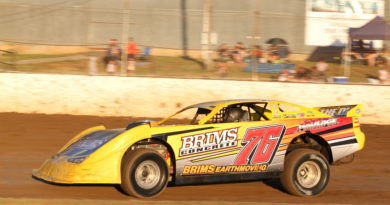 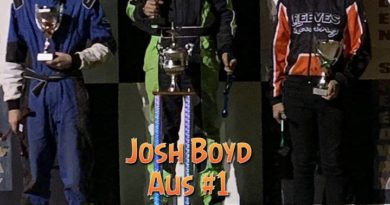