Smee, who has won two of the past three state titles, was followed to the chequered flag by Rusty Whittaker, while Smee's nephew Harley Smee was third.

Hard luck man of the race was leader Darren Vine who crashed in the latter stages of the event while lapping a slower car.

The mighty midgets again turned on a super show in the 30-lap main event as a number of cars ran in contention in the front group of the field.

Brock Dean took the early lead and maintained his advantage but was being pressured by Vine as Matt Jackson, Nathan Smee, Harley Smee and Whittaker battled for positions. Further back Jeff Burns and Dean Meadows were also running close together. Also in the traffic snarl were Bradley Harrsion and Braydan Willmington who finished fourth and fifth respectively.

Vine took over the front running, while Whittaker got under Dean as Smee followed Whittaker in the same passing move on Dean.

It looked as though Vine was set for victory, but then his race was lost after he tangled with a lapped car and rolled his machine.

Vine escaped unscathed and watched the rest of the race from the infield as Smee, after passing Whittaker, took up the front running at resumption. Smee was always going to figure in the result and took the chequered flag in a repeat performance of his 2017 title success.

Former titleholder and one of the title favourites, Adam Clarke, was a late withdrawal after not getting their car ready on time. National Champion Kaidon Brown also was out after his team could not get their car from Sydney docks in time after racing in New Zealand.

The 100-lap Australian Wingless Sprintcar GP was taken out by Scott Thomsen from Jacob Jolley and Michael Butcher.

Thomsen was the dominant runner in the field after he garnered the lead in the early stages. The race ran virtually incident free – apart from a yellow light with 62 laps remaining.

Jolley made a race of it in the latter stages as he loomed up on Thomsen's tail in his bid for victory. This was when lapped traffic came into play as Thomsen maintained his advantage to the chequered flag with a good win over the fast-finishing Jolley.

Defending titleholder David Eggins persisted with a high line that offered little and he never looked a likely winner at any stage. 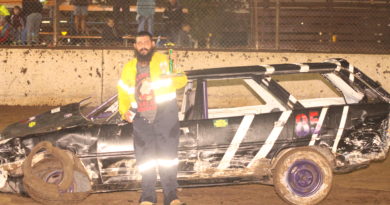 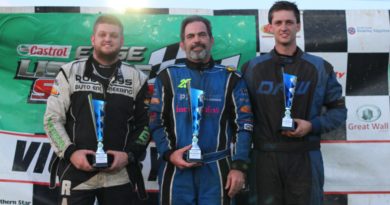