THE Grand Final of the Mr Modified Series at Castrol Edge Lismore Speedway has now been added to the schedule and will be held at the 2020-2021 season finale on April 24.

Every endeavour was made to secure a date for the decider after the event was initially washed out early January.

Other attempts later in the season were thwarted and it appeared one of the annual major V8 Dirt Modified races of the season would not be run.

However, after talking with V8 Dirt Modified officials, promoter David Lander has slotted in the event to bring down the curtain on another season of racing at the showground venue.

He is delighted all parties have reached an agreement for April 24.

“I was always keen to run the final of the Mr Modified Series, but at first, it looked like nothing was available in our remaining dates to run the event,” he said.

“We were set to run it over Easter but the Brisbane COVID crisis ruined that opportunity as well. But it has now all come together and I hope we get a good car count for the series finale.”

Immediate attention turns to this weekend, April 17, when the Street Stock Rumble will go under the flag.

The main event will be held over 20 laps after earlier heats are decided.

There is little in track championship points between the top three in the standings, Adam Grill, Wayne Arthur and Luke Gray. All three have entered for this coming weekend ensuring the points battle for title honours will also play a role in the outcome of the April 17 fixture.

Another interesting showdown that will go to season's end focuses on the Junior Sedans. Only 70 points separates the top three entered, Jacob Waller, Jaiden and Sophie Santin, for the penultimate meeting of the season.

The same applies to Wingless Sprintcars in the track title battle between Jacob Jolley and Trent Martin. According to Wingless points standings, only 15 points separate leader Jolley and Martin, so everything is still up for grabs with the title yet to be decided as it's currently too close to call.

Racing for RSA Four Cylinder Sedans and AMCA Nationals are also programmed for the April 17 show.

For more information, phone the Lismore Speedway office on 66212733 during business hours. 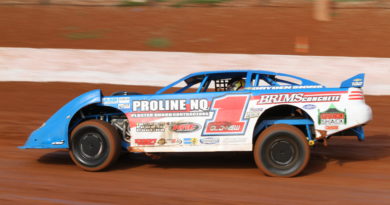 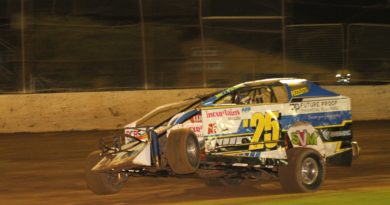