Jordan was followed across the finish line by Brody Fraser while third placing went to Nick Chilcott.

As an indication of the intensity of competition in the feature race the top ten finishers were all on the same lap in the run to the chequered flag.

Jordan did not take over the lead until the second half of the race after a tough battle in the initial stages as he settled into a position near the head of the field.

Stuart Fawcett was the initial leader but it was Fraser who applied the early pressure. Jordan, who started up near the front of the field, soon moved into contention even though he gave some ground to the front runners in the early stages.

There were plenty of dices in the field as Chilcott got on the outside of Madison Harkin and Brendan Clapham also was involved in the traffic snarl.

The first of several yellow light caution periods occurred after ten laps. By this time Fraser was the leader and once again took command when the lights turned to green.

Adrian Stott also was near the front of the field but it was Jordan who got under Fawcett and then applied pressure to leader Fraser. Nick Chilcott also made his bid for victory and within the last ten laps the race was still up for grabs. It was after a yellow that Chilcott held command of the keenly contested event but, after another caution period to remove Daniel Bridge's stranded car from the top of the track, that's when Jordan pounced at the restart and took over the front running.

But it was still far from over as Jordan was forced to stave off Fraser and Chilcott.

Jordan showed his years of experience competing in sedans as he held off the challengers over the remaining distance and recorded an impressive victory over Fraser and Chilcott.

Stott and Chilcott dominated the heats, each with two wins, while the other two heats were won by Josh Arthur and Joel Berkley respectively.

David Eggins drove the track perfectly following some work on the surface by curator Tony Powell and used the high line to his advantage as he raced to victory in the Wingless Sprintcar feature race. Michael Butcher and Rob Hamilton filled the minor placings. The previous meeting's main event winner Jacob Jolley finished fourth.

The next race meeting at Castrol Edge Lismore Speedway will be the Mr Modified series opening round on Boxing Night (December 26). 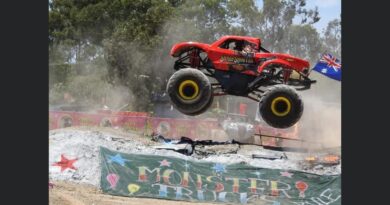 A MONSTER TASK FOR A YOUNG MAN