It's the moment of truth for Lismore Track Championship honours and there's a number of drivers still in contention from the respective divisions to ensure it all gets down to the season finale.

“That's what makes this meeting so interesting because our divisions still have to battle it out for track title honours. To add to that, the V8 Dirt Modifieds still have to decide their Mr Modified Series with the final also set for this Saturday night,” promoter David Lander said.

The man who already has one hand on the Mr Modified series trophy is Mitch Randall who raced to an impressive victory in the opening round on Boxing Night (December 26).

But round one runner-up Andrew Pezzutti and third-laced Mark Robinson still have a chance to wrench the title from Randall's grasp.

According to point scores provided the track, the closest battle for the Lismore track title looms in the Wingless Sprintcar division and serves as an example of just how ultra competitive this section really is because going into this meeting there are only 15 points between championship leader Jacob Jolley (1195 points) and closest pursuer Trent Martin (1180).

It gets down to a battle between Jolley and Martin as Seiton Young is 325 points (870) is three hundred and twenty-five points adrift in third.

But what stands out more than anything else is 485 points covers the top seven in the current Wingless standings ensuring the final top ten finishing positions are far from being resolved.

The Street Stock title is almost as close as the Wingless with only 20 points between the top two in the standings, Adam Grill (1120) and Wayne Arthur (1100), but, even more incredible, is only 25 points overall separates the top three, with Luke Gray (1095) in third.

However, the Wingless and Street Stock classes are not alone as all of the regular divisions provide close competition and when it comes to Junior Sedans, it's a battle between Jacob Waller and the Santin brother and sister racing duo, Jaiden and Sophie Santin.

In recent weeks no more than 70 points separated the top three, ensuring a battle to the finish line in this weekend's feature race.

There is also a close tussle for top honours in the AMCA Nationals with latest standings revealing only 60 points separating current championship leader Darren Miller (740) and Paul Reeves (680). Those two have cleared away from third placegetter Mark Taylor who is 185 points behind Reeves.

Production Sedans' season standings are currently led by Matthew Layton (1035) who enjoys a 30 point buffer to Jordan Biviano (1005), while Myles White (935) is 100 points adrift of the leader back in third.

A late addition to the big variety programme this Saturday night will be the appearance of the old style bash and crash stockcars. A group are travelling down from Brisbane especially for the Lismore fixture and are certain to put on a show for the fans. 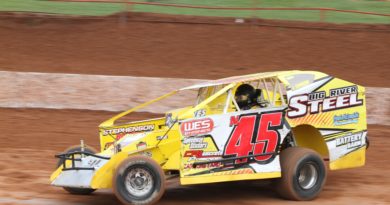 PAGEL ON A MISSION DENNIS NEWLYN