In what rates one of the outstanding long-term commitments Ted, 57 (58 in September), has been a Lismore track worker for 32 years and the family are right there with him all the way.

They a part of the furniture you might say.

His wife Julie and daughter Amanda are not only long term servants of Lismore Showground Speedway but through all those years, they have missed very few meetings.

“My daughter Amanda and Julie have worked the same amount of time as me at the speedway,  lap scoring the whole time as well.

“I might have missed one meeting here or there if I was away as I am involved with camp drafting,” Ted added.

It's an incredible devotion to their job and, of course, Castrol Edge Lismore Speedway.

“What really got me involved was watching Grenville Anderson. I just enjoyed watching the racing and the competitive nature of the drivers,” Ted explained, little realising way back then how he would later become involved with the circuit.

However, it was a next door neighbour – June Randall – who was the person chiefly responsible for getting the Winnell family into working positions at the speedway.

The Randall family need no introduction to their long time role at the Lismore circuit. June has the mantle of being one of the longest serving lap scorers at the circuit.

“One night we were sitting in the stand and she asked if we could give her a hand in the tower. They were a lap scorer down for the night and it really all went from there. That was a long time ago.

“I started doing the manual timing light we used to have, then I went to doing lap scoring, then the flags and have been 16 years on the flags.”

Ted has three children and ten grand children and it's easy to see when talking to Ted family means more than anything. What also makes it very special is their shared interest in speedway. It's a way of life for the Winnells. “It's great, just being involved for all these years with Lismore Speedway,” Ted proudly acknowledged.

Ted's flagman role is his signature, but “I did also have a go at chief stewarding there for a while.”

He resides at Yorklea in the Casino area and during the week Ted is a maintenance man at a local piggery.

Ted says there is no end in sight to waving the Lismore flags and speaks for the whole family when he says: “I will do it as long as my body is able to do it.

Start of a New Era…. 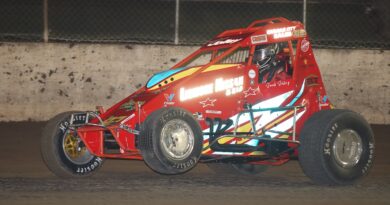