AMERICANS Cory Eliason and Lucas Wolfe expect a tough contest at Castrol Edge Lismore Speedway when they compete in round ten of the World Series Sprintcar Championship, Tuesday, January 14.

The seasoned US professionals are not accustomed to racing on such a short track like the Lismore Showground with its circular, tight confines, but will quickly adapt to the conditions. In America, racing is their job and both are coming off tough 2019 seasons in the US.

Eliason, from California, campaigned on the national World of Outlaws trail while Pennsylvania's Wolfe is a member of the famous Pennsylvania Posse in which some of the toughest competition in American Sprintcar competition can be found.

Eliason was a recent main event winner at Sydney's Valvoline Raceway. Wolfe has been racing in the WSS this season and knows the Lismore round will not be easy. “Every race is a challenge and Lismore is a track that certainly offers that, but it will be good,” he said.

It sets up an interesting contest as the US stars compete for honours on the testing Lismore circuit against some big name Australian drivers including national titleholders Brooke Tatnell, Kerry Madsen, James McFadden and David Murcott.

One driver who has travelled many kilometres to compete in the international Sprintcar event is Sydney star Sam Walsh. He will renew acquaintances with Eliason after competing against him at his Valvoline Raceway home track.

Walsh is fast and his team is one of the best equipped in the country with the backing of Sydney's high profile Rocket Industries speed equipment dealership. He has scored some impressive wins in Sydney this season and certainly comes into calculations for honours.

“Lismore is a driver's track and it's almost a complete circle which requires plenty of concentration. But I like the track and this will be a tough meeting with some talented drivers entered,” Walsh said.

The ground pounding Sprintcars are powered by 410 cubic inch V8 engines which develop close to 900 horsepower. Sprintcars are the most popular category in Australian speedway and the World Series Sprintcars Championship is a national tournament that has been on the scene since the 1987/88 season and carries a high profile in the sport.

It has been several years since the championship trail has stopped off at the Lismore circuit and the WSS return is eagerly awaited. After Lismore, the WSS contingent head south for major events before rounding out the series next month in Western Australia.

Gates open at 4PM and racing commences at 5:30pm. The WSS will be supported with events for Production Sedans, Junior Sedans and a Wingless Sprintcar category.

Caption: American Cory Eliason will be keen to continue his winning form when he races at Castrol Edge Lismore Speedway.  Photo: Tony Loxley. 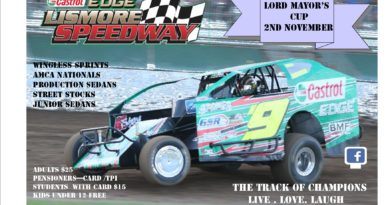 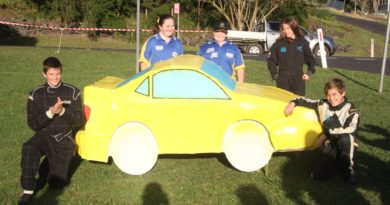 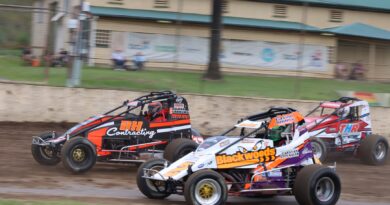